What is an operating system?

Your computer’s operating system (OS) manages all of the software and hardware on the computer. Most of the time, there are many different computer programs running at the same time, and they all need to access your computer’s central processing unit (CPU), memory, and storage. The operating system coordinates all of this to make sure each program gets what it needs.

Modern operating systems use a graphical user interface, or GUI (pronounced gooey). A GUI lets you use your mouse to click icons, buttons, and menus, and everything is clearly displayed on the screen using a combination of graphics and text.

If you’re buying a new computer or are upgrading to a newer version of Windows, you can choose from several different editions of Windows, such as Home Premium, Professional, and Ultimate. You may need to do some research to decide which edition is right for you.

Linux (pronounced LINN-ux) is a family of open-source operating systems, which means they can be modified and distributed by anyone around the world. This is different from proprietary software like Windows, which can only be modified by the company that owns it (Microsoft). The advantages of Linux are that it is free, and there are many different distributions—or versions—you can choose from. Each distribution has a different look and feel, and the most popular ones include Ubuntu, Mint, and Fedora.

Linux is named after Linus Torvalds, who created the Linux kernel in 1991. The kernel is the computer code that is the central part of an operating system.

According to StatCounter Global Stats, Linux users account for less than 2% of the operating systems market as of September 2014. However, most servers run Linux because it’s relatively easy to customize.

Operating systems for mobile devices generally aren’t as fully featured as those made for desktop and laptop computers, and they aren’t able to run all of the same software. However, you can still do a lot of things with them, like watch movies, browse the Web, manage your calendar, and play games.

The users of batch operating system do not interact with the computer directly. Each user prepares his job on an off-line device like punch cards and submits it to the computer operator. To speed up processing, jobs with similar needs are batched together and run as a group. Thus, the programmers left their programs with the operator. The operator then sorts programs into batches with similar requirements.

The problems with Batch Systems are following.

Time sharing is a technique which enables many people, located at various terminals, to use a particular computer system at the same time. Time-sharing or multitasking is a logical extension of multiprogramming. Processor’s time which is shared among multiple users simultaneously is termed as time-sharing. The main difference between Multiprogrammed Batch Systems and Time-Sharing Systems is that in case of Multiprogrammed batch systems, objective is to maximize processor use, whereas in Time-Sharing Systems objective is to minimize response time.

Multiple jobs are executed by the CPU by switching between them, but the switches occur so frequently. Thus, the user can receives an immediate response. For example, in a transaction processing, processor execute each user program in a short burst or quantum of computation. That is if n users are present, each user can get time quantum. When the user submits the command, the response time is in few seconds at most.

Operating system uses CPU scheduling and multiprogramming to provide each user with a small portion of a time. Computer systems that were designed primarily as batch systems have been modified to time-sharing systems.

Distributed systems use multiple central processors to serve multiple real time application and multiple users. Data processing jobs are distributed among the processors accordingly to which one can perform each job most efficiently.

Network Operating System runs on a server and and provides server the capability to manage data, users, groups, security, applications, and other networking functions. The primary purpose of the network operating system is to allow shared file and printer access among multiple computers in a network, typically a local area network (LAN), a private network or to other networks. Examples of network operating systems are Microsoft Windows Server 2003, Microsoft Windows Server 2008, UNIX, Linux, Mac OS X, Novell NetWare, and BSD.

Real time system is defines as a data processing system in which the time interval required to process and respond to inputs is so small that it controls the environment. Real time processing is always on line whereas on line system need not be real time. The time taken by the system to respond to an input and display of required updated information is termed as response time. So in this method response time is very less as compared to the online processing.

Real-time systems are used when there are rigid time requirements on the operation of a processor or the flow of data and real-time systems can be used as a control device in a dedicated application. Real-time operating system has well-defined, fixed time constraints otherwise system will fail.For example Scientific experiments, medical imaging systems, industrial control systems, weapon systems, robots, and home-applicance controllers, Air traffic control system etc.

There are two types of real-time operating systems.

An operating system performs these services for applications: 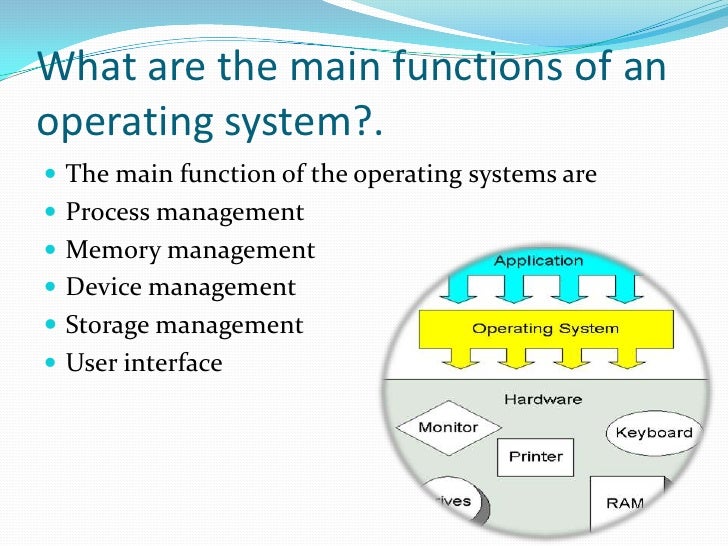